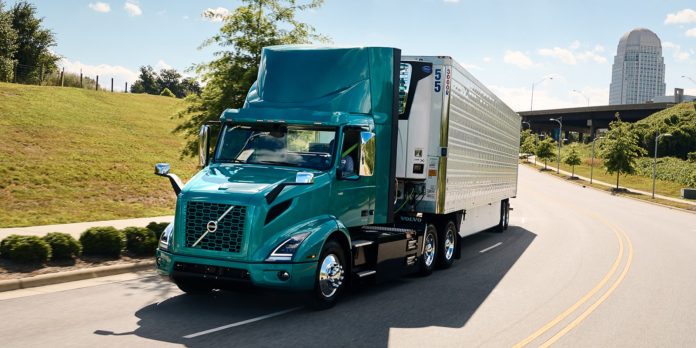 Daimler and its subsidiary Freightliner have announced that they will not release sales numbers for their new electric vehicles, the Cascadia, and eM2 until they are closer to production.

The company currently has 40 electric big rigs on the road, undergoing tests in many areas. But they began their EV testing program long before other companies.

Early on, Volvo started testing electric tru cks to stay ahead of the curve. With these pilot programs turning into orders from major fleet operators, Volvo is well-positioned for the future.

Performance Volvo Cars, a UK taxi operator, followed up with another order for 110 Volvos EV for their London fleet. These new cars will be set to run routes in early 2023.

Volvo’s contract with Maersk and Performance Team, alone, made the company $50+ million. In fact, each VNR Electric sold for upwards of $400,000, based on how they were configured.

Elsewhere, NFI Industries has ordered 60 EV trucks from Volvo after participating in a pilot program and operating two Volvo EV big rigs for the year 2020.

The company will have 90 electric trucks in Southern California, as Auto News reports. 60 of them will be Volvo VNR Electric models and the remaining 30 will be Freightliner Cascadia’s.

The Volvo VNR Electric trucks provide a range of up to 275 miles, which allows two trips per day from southern California to NFI warehouses inland.

But Volvo is already working with dealers and utilities in the entire state to build up infrastructure for a commercial charging corridor that’ll connect Southern, Central, and Northern California.

Volvo wants to become the dominant truck maker in North America because they enjoy an early lead, a company-backed infrastructure, and experts within the industry.

Freightliner trucks outsell their rivals in the U.S. by far. But the transition to electric trucks will finally give Volvo the chance it needs to surpass Freightliner and become the industry’s top truck maker.

Despite it being a growing trend, diesel-powered trucks still dominate the market. We expect to see about 150,000 models sell this year.

Worldwide, Freightliner has a 40% market share, while Volvo only has 11%. So it’s going to take a lot for Volvo to get in close distance and storm that market.

Commercial fleets will usually stick to a preferred brand like Freightliner and make repairs more streamlined, but Volvo is betting on EVs, which require less service.