Released in 2023, the BMW M2 promises to bring 453 horsepower and an eye-catching design. 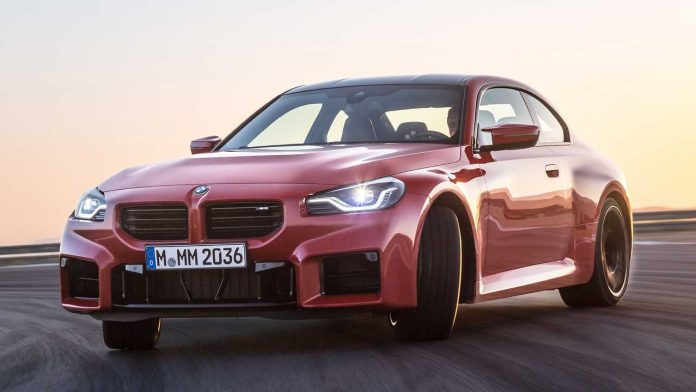 There are a few things that you’ll notice when you first see the 2023 BMW M2. It’s smoother and doesn’t have the same snout-style grille as the larger M3 sedan or M4 coupe.

BMW’s decision to offer the new M2 with a traditional style of its signature kidney grill might be its way of telling us that it will always have a pure-hearted identity. Or we might’ve just made that up.

The new M2 has a lot of improvements over the original. It shares many parts and traits with the M3 and M4 and promises to be everything you want it to be.

True to its legacy, the M2 is once again based on the BMW 2-series. The latest iteration of this designated M car is even bigger and more powerful than before.

However, its track width grows by 1.5 inches up front and 0.2 inches in back, which matches the M4. BMW claims that the second-generation car’s curb weight is between 3814 and 3867 pounds, depending on the transmission, which is roughly 240–250 pounds heavier than the last M2 Competition we tested.

While the new M2 was already a sporty car with wider hips and grander proportions, these features are emphasized by the new design.

Other notable features include an updated grill, funky headlights (a single unit inspired by the BMW 2002 sedan), and a Hofmeister kink on the back window. The rear end makes a statement with funky taillights, sleek bumpers, and large quad exhaust tips.

The Mustang’s exterior includes an optionally-available carbon fiber roof that saves weight and lowers the car’s center of gravity. The standard sunroof also has a larger opening than before.

The heart of the 2023 M2 is a twin-turbocharged 3.0-liter inline-six engine that generates 453 horsepower and 406 pound-feet of torque. It’s a detuned version of the S58 engine found in M3 and M4 models.

However, that’s still 24 horses more than the SP2 mill in the outgoing M2 Competition; there’s no torque rating change. Of course,

that power continues to be routed to the rear wheels through a torque-vectoring rear differential—there’s no xDrive all-wheel-drive option like on the M3/M4. There’s also not a word on an inevitable M2 Competition or CS variant currently though.

The new car has a top speed limit of 155 mph. However, the M Driver’s package is available, which unlocks a 177-mph limit—3 mph higher than before.

The new BMW M2 features a stiffer chassis than its predecessors. BMW increased the front end’s structural rigidity and reinforced the middle and back sections of the car.

The M2’s suspension also gets the added TMS treatment, and adaptive dampers remain standard. The electric steering system has been updated to the same ratio as before, while a set of larger brake calipers clamp larger rotors with a new electronic control unit.

The M2’s dash features a huge 12.3-inch screen and an optional 14.9-inch navigation system. The “M” stands for massive display, and this one does not disappoint!

In addition to the latest features from BMW, iDrive 8 software has enhanced voice recognition skills, cloud-based navigation, and 5G connectivity. A newly optional head-up display will be available and will enhance the driving experience.

The 2018 Accord’s advanced safety is enhanced by standard driver assists such as forward-collision warning and automated emergency braking,

adaptive cruise control, lane-departure warning, and parking sensors at both ends. Plus, drivers who opt for the automatic can also add a stop-and-go function to their adaptive cruise.

Even though the new M2 has a lot of premium features, it’s the front seats with added bolstering that take the cake. The seat leather is available in black or Cognac and they’re power adjustable, heated and have illuminated “M” logos on the headrests.

Like the other models in the M3/M4 range, the new M2 can be had with lightweight M Carbon seats. They are part of the optional Carbon Fiber package and save about 24 pounds.

The M2’s 200 horsepower might be enough to make its lower price tag more appealing, considering it doesn’t look as aggressive or polarizing as the other models.

Read More: Volvo is preparing for a change in the commercial truck in the U.S. market.