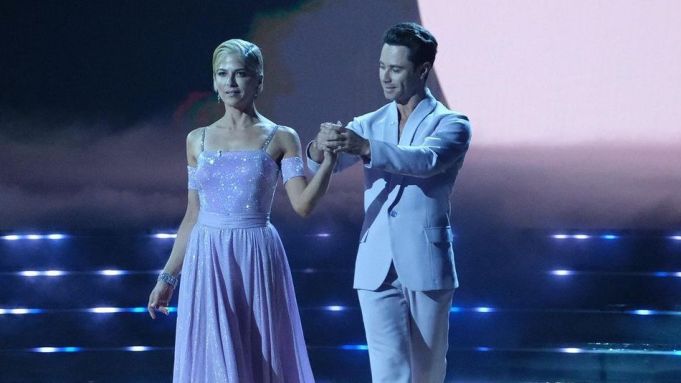 The premiere of “Dancing With the Stars” featured Selma Blair and her tear-inducing performance.

“Dancing With the Stars” is back! After being on ABC since its debut, it’s now on Disney+, which means two hours of live entertainment, no commercial breaks. The show can fit in 86 minutes, so the producers were left with 34 minutes to fill.

“Those are our biggest challenges this season—how to fill that time editorially, and secondly, how to deal with losing the minutes of content we used to use for a reset?” executive producer Conrad Green told Variety ahead of the premiere.

One way that time has been filled is with the return of the skybox, an interview and dance studio duo spot. Alfonso Ribeiro is hosting and speaking to various celebrities, including recently retired stars like Gwen Stefani.

“We needed to bring back the skybox so we could have a clear stage and that meant having other people be on set with us,” Green says. “So now on the set there is co-hosts as well.

Alfonso is a former contestant on the show and really knows the ins-and-outs of the show. He’s close friends with some of the dancers and he provides humor and genuine interest in the celebrities and their journeys.

Monday’s season premiere was the return of Ballas and Van Amstel, who both have taken time off from past seasons.

ABC’s Dancing with the Stars featured lots of emotions during the premiere. Wayne Brady had tears in his eyes after receiving 8 out of a perfect 10 for his family member, recently passing away.

Later, when Selma Blair danced and cried, there was no dry eye in the house. Despite her diagnosis a year ago, she performed at an emotional level that touched people everywhere.

After the scores and votes were in, Teresa Giudice and Jason Lewis landed in the bottom two. The judges chose to save Giudice, sending Lewis home.

Be sure to tune into ABC Monday, because the dancers performing this week are none other than Elvis and James

Read More: Lea Michele TikTok On The Theory That She Can’t Read